↓ Skip to Main Content
Home › - English › When dealing with FATCA, gather your team, a tax lawyer and an accountant

When dealing with FATCA, gather your team, a tax lawyer and an accountant

lehmanPosted on April 23, 2015 Posted in - English, Settling with the IRS

There are several new laws in place to implement the reporting of these foreign bank accounts and to permit U.S. taxpayers to “clear the record” in the event they have not reported these accounts in the past.

The IRS has established three separate programs under which the American taxpayer can now report foreign bank deposits that have been unreported in the past.

The purpose of this article is to focus on the fact that the United States taxpayer, who is not in compliance with the Foreign Account Tax Compliance Act (FATCA) must understand that the appropriate way to deal with these unreported accounts is to rely on the team of both a tax lawyer and a CPA to fulfill the compliance requirements.

The cornerstone of determining which of the three U.S. relief programs is applicable to each taxpayer, is the determination of whether under the law a taxpayer who has not complied with the reporting requirements is either “willful” in his or her noncompliance or “non-willful”. The determination is a legal determination that has significant consequences.

The determination of which of the three relief programs offered by the IRS, is the appropriate program for the reader begins with the legal determination of whether the taxpayer is willful or non-willful. This is because in the event the taxpayer has been “willful” in their failure to file the appropriate bank reporting accounts, the taxpayer can be subject to a vast array of penalties. Even the willful taxpayer who is not in compliance to the IRS will be able to come into compliance with the United States laws and avoid the array of penalties that could very well devastate the fortunes of the “willful” taxpayer. The willful taxpayer has the chance to join one of the IRS programs.

The test for willfulness is whether there was a voluntary intentional violation of a known legal duty. The burden of establishing willfulness is on the Internal Revenue Service and if it is determined that the violation was due to reasonable cause, the willfulness penalty will not be asserted.

According to the IRS Manual, the innocent failure of an unsophisticated Taxpayer to know the filing requirements for international transactions, coupled with other factors, such as the lack of any efforts taken to conceal the existence of the accounts could not lead to a conclusion that the violation was due to willful blindness.

Willfulness can rarely be proved by direct evidence, since it is a state of mind. It is usually established by drawing a reasonable inference from the available facts. The I.R.S. may base a determination of willfulness in the failure to file the FBAR on inference from conduct meant to conceal sources of income or other financial information. For FBAR purposes, this could include concealing signatory authority, interest in various transactions, and interest in entities transferring cash to foreign banks.

The taxpayer will then be required to include in the amended tax returns any and all income not reported from the foreign bank accounts and pay the tax on such income. This tax will be subject to a 20% accuracy penalty and will, in addition, be charged with interest on unpaid taxes. The taxpayer will also be required to pay a bank deposit penalty equal to 27 ½% of the highest bank deposit balance over the eight year period.

Non-willful taxpayers who are nonresidents outside of the United States will be permitted to enter into the Streamlined Program for nonresident taxpayers. Pursuant to the Streamlined Program, they will be required only to file three years of tax returns that should be amended to include any and all unreported income and they will be required to file FBAR reports for the prior six years. There will be no penalty assessed on foreign bank deposits of those United States taxpayers who are residents abroad.

Non-willful taxpayers who are residents of the United States will be permitted to enter into the Streamlined Program for resident taxpayers. Pursuant to this Streamline Program, they will be required only to file three years of tax returns that should be amended to include any and all unreported income and they will be required to file FBAR reports for the prior six years. There will be a five percent penalty assessed on foreign bank deposits of those United States taxpayers. 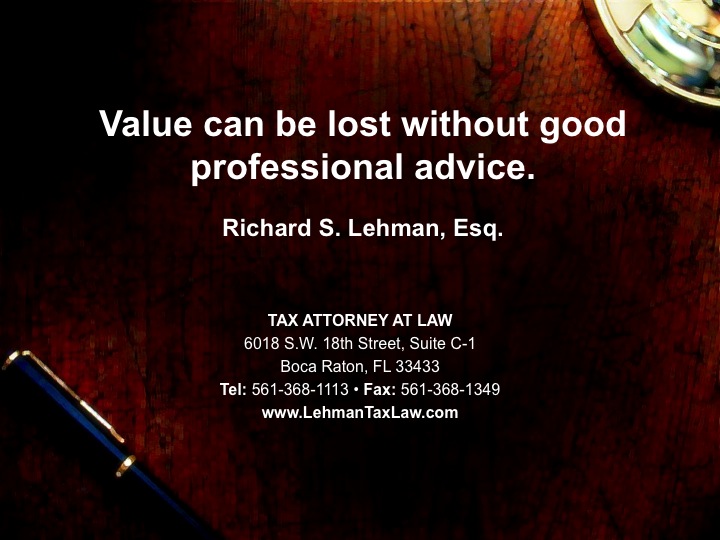