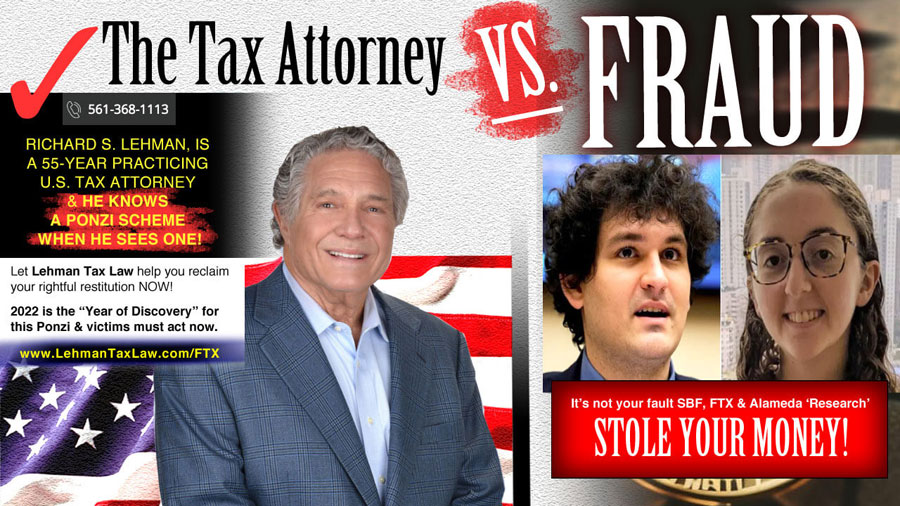 The following is Report No. 1 in what is intended to be a series of reports focusing on the tax benefits available as a result of the FTX fraud. These Reports are not intended to be and can not serve as legal advice to any reader.

Each taxpayer has their own unique factual situation which is going to need to be reviewed by tax advisors and litigation counsel before any legal conclusions can be reached. The Reports are being made in a series form since there is still a great deal of facts to be uncovered in the FTX fraud. These facts are going to be extremely important in coming to conclusions about tax positions.

Furthermore, there could be guidance from the I.R.S. in this particular situation or any number of other factors that require the subject matter to be updated on a continual basis. The FTX fraud has resulted in much pain throughout the world. Hopefully some of this can be eased in the form of tax relief from either the U.S. or other countries whose citizens are entitled to permit their financial losses to be deducted from their taxes.

The FTX Tax Losses – The Basics

The FTX fraud was a Ponzi scheme and losses from Ponzi schemes are acknowledged by the I.R.S to be “theft losses”. They are deductible from a taxpayer’s ordinary income.

There are several methods of tax recovery that are available to Ponzi scheme victims. However, each of these potential options of recovery have their limitations, restrictions, and strict requirements that must be met if one is to take advantage of the maximum tax benefits from the FTX theft.

The two most critical mistakes that result in the loss of the maximum advantage of these tax deductions seem to be:

The benefits and the traps make it important to tax plan properly to maximize the tax losses. It is critical that tax advisors and litigation counsel work closely together in order to not foreclose any of the available options for ponzi scheme victims to make use of tax losses. Hopefully, professionals working together will avoid costly mistakes.

In considering the various options of recovery available for tax losses some fundamental knowledge of the law is important. We are going to cover those fundamentals into the following order.

The Amount of the Theft Loss

The amount of the theft loss that is deductible is calculated as the tax basis of the lost assets reduced by insurance proceeds recoverable and other claims for which there is a reasonable prospect of recovery.

To result in a tax loss the lost asset must have a tax basis.

If the theft is accomplished in a manner that results in the taxpayer’s failure to include the lost asset in income or if a taxpayer has claimed the amount of the loss as a different type of deduction no theft loss will be allowed. In such a case, there should be no deduction because the lost property would have a zero tax basis.

A court denied any theft deduction loss for embezzled property where a taxpayer (“Employer”) had already received a tax benefit from the loss through the embezzler’s inflating the taxpayer’s cost of goods sold in order to accommodate the embezzlement. The taxpayer’s former comptroller, (“Employee”) had embezzled more than $700,000 over the preceding seven years. All the embezzlements were accomplished through fictitious charges by the Employee that increased the Employer’s cost of goods sold and reduced the Employer’s taxable income by the embezzled amount each year. There was an economic loss but not a tax loss since the tax loss had already been deducted.

Furthermore, it is recognized that costs such as legal fees incurred in collecting on Ponzi schemes were deductible as a theft loss. Courts have found that these costs and others such as the costs of recovery or salvage are so closely identified with the theft loss itself as to add further theft losses.

Assume since 2019 that taxpayer X invests $1.0 million with FTX personally and $1.0 million is invested by the taxpayer’s I.R.A. with FTX.

The taxpayer’s tax loss (not economic loss) for recovery purposes is $2,000,000. The taxpayer invested $1.0 million and “earned” $1.0 million upon which taxes were paid. The $2.0 million in I.R.A. however, has never been taxed before.

The Timing of the Theft Loss Tax Deduction:

This issue, the timing of the theft loss deduction, is the critical issue in the FTX theft. Most likely, the vast majority of the victims of the fraud will want to claim a theft deduction for the year 2022. Such a claim, if submitted properly may result in the swiftest and largest cash recovery from the theft of all of the sources of recovery. This will be in the form of tax refunds. Furthermore, to the extent the theft losses are not all used as a claim for a refund of prior taxes paid, they will be available to offset future income starting as early as 2022.

A theft loss is treated as sustained during the taxable year in which the taxpayer discovers the loss.

There are two key phrases to keep in mind when reading these general rules about timing of the deduction.

The first is “reasonable prospect of recovery”. The second phase is “ascertain with a reasonable certainty”. The effect of these phrases on the appropriate timing of a theft loss deduction is as follows:

There is one very recent case that involved a “Ponzi like” scheme perpetrated on a Palm Beach couple. This case has added a good deal of clarity to the law on the timing of the theft loss deduction and other related deductions.

In 1997 Palm Beach County residents Aben Johnson and Joan Johnson discovered they were the victims of a fraud scheme involving the purchase of gems and jewelry in which they had lost approximately $78 million. The scheme had lasted from 1988—1997. During almost the entire time of the fraud the Johnsons “income” from their investments in gems was the repayment of their own funds that were paid previously to the perpetrator. Though the Johnsons discovered the fraud in 1997 they did not take any formal actions against the perpetrators of the fraud in 1997. The Johnsons however, did undertake an investigation in 1997.

The court, that decided the last of the three Johnson cases in January of 2012, provided a great deal of guidance for the intelligent treatment of theft losses.

The court in the Johnson case confirmed that in the year of the discovery of the theft, the taxpayer could claim a deduction for that portion of a theft loss that the taxpayer could identify as not having a reasonable prospect for a recovery.

However, the Johnson’s tried to claim all of their theft losses in 1997, not just a designated provable portion that could not be recovered. Since in 1997 there appeared to be many avenues of recovery, this meant there was a “reasonable prospect of recovery” with an unknown amount. Therefore, the court denied the year deduction for the 1997, the year the loss was discovered.

The taxpayers then claimed a major loss in 1998 and in 1998 the taxpayer made a better attempt to quantify the portion of the loss that would not be recovered. However, in 1998 the taxpayer admitted to the fact that they were using “estimates”. Consequently, the court denied any theft loss deduction in 1998.

In denying the 1998 deduction the court stated:

Since the year 1998 was not the year the theft loss was discovered and since the Johnsons had decided to enter into extensive litigation by 1998, a theft loss deduction could not be taken until the Johnsons could ascertain with a reasonable certainty that the reimbursement will not be received for any portion of the loss.

Again the court’s words defined the higher standard for 1998.

It was not before 2001 that the Johnson’s eventually clearly defined with certainty the amount of recovery they would receive and were entitled to a theft loss deduction for the unrecoverable amount.

It is obvious that obtaining the theft loss deduction for the year 2022 will involve as clear an understanding as possible of the characteristics of the two key legal phrases “reasonable prospect of a recovery” and “ascertain with a reasonable certainty”.

Other Sources of Tax Recovery

Investors may not need too be concerned about their ability to recover taxes paid on the phony “profits” that were being credited to investors’ accounts as taxable income. This is often referred to as “Phantom Income.”

Phantom Income in the FTX accounts was typically reported over the years as taxable income on which taxes were paid. These amounts upon which taxes have been paid will be considered part of the investor’s basis and will be part of the loss amount for theft loss deduction whether the funds were actually paid in the account or not.

Furthermore, the tax benefits of the loss of Phantom Income can be accomplished in another way than the theft tax loss deduction.

In the same Johnson case previously discussed, the taxpayer proved to the court that in the last few years of the Johnson Ponzi scheme there never was any significant amount of capital. Therefore since new capital was simply passing through to pay off the investors with their own money, the court permitted the taxpayer to file amended returns that eliminated the Ponzi scheme “false income” or “phantom income” as taxable income.

There is one other theory of recovery. Again it may be only available in the situation where “FTX Income” did not exist at all and that new money did little more than pass through the scheme to pay distributions to old money was not supported by any truth at all. However, under limited circumstances, taxpayers who have received actual cash payments from the Ponzi scheme have been permitted to amend previous returns reflecting those actual payments as a non-taxable return of capital.

This article has been reposted, with permission from the U.S. corporate offices of Lehman Tax Law: https://www.lehmantaxlaw.com/ftx-ponzi-scheme