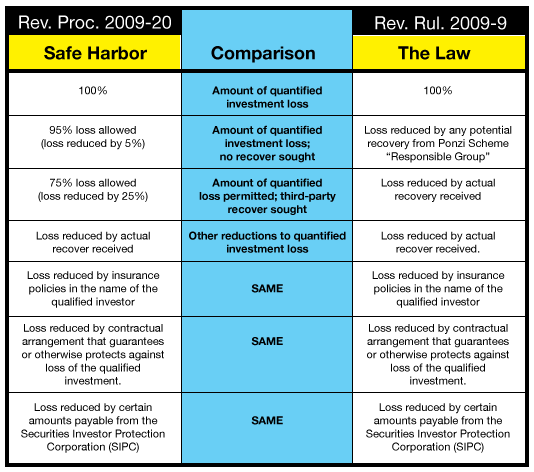 In 2009, two important documents were issued by the IRS regarding the taxation of Ponzi schemes.

In the Rev. Rul. 2009-9, the IRS clarified much of the previously unsettled law in this area. The Rev. Proc. 2009-20 applies to losses for which the discovery year is a taxable year beginning after December 31, 2007; it offers thousands of Ponzi scheme victims a badly needed uncomplicated shortcut to cash refunds from tax losses. These two IRS documents form a good package and were drafted in record time, for any government agency.

However, it is important to remember that the IRS is not in business to give back money. The “safe harbor” needs to be studied carefully, because it could be extremely expensive form a tax standpoint. It might be a safe harbor, but the tax cost to dock your boat in this harbor could be very high.

To provide a very simplistic example, assume that there are $30 billion of Ponzi scheme losses that would be able to receive theft loss tax benefits. Assume that this Ponzi scheme Income or amounts of principal, when taxed, were in the highest tax brackets. Therefore, again, to keep it simple, assume the average tax bracket is 35% for the Ponzi Income included in Income by taxpayers in prior years. Taxes collected $10.5 billion (35% x $30 billion).

For reasons like this, many Ponzi scheme victims may choose not to avail themselves of the safe harbor of Rev. Proc. 2009-20. This is especially so because the legal guidance offered by Rev. Rul. 2009-9 is so helpful.

Before Rev. Rul. 2009-9 was issued, there was a good deal of case law interpreting various aspects of the theft loss deduction. The cases relied on were at times 40 to 50 years old, and many reflect the absence of the type of forensic accounting that can be accomplished today. For this reason and others, although there was a great deal of case law interpreting the statutes and regulations, there remained a great deal of confusion about where certain lines were drawn.

The IRS has done an extremely good job of clarifying that confusion by way of Rev. Rul. 2009-9. These clarifications are very helpful, whether or not one chooses to be covered by the “safe harbor”

Finally, the IRS is using a not-so-subtle form of administrative coercion to force the use of the safe harbor by announcing that those who do not choose the safe harbor may be subject to stricter standards of proof and increased audit potential.

Therefore, it is imperative that Ponzi scheme victims meet with their accountants and financial advisors that have the knowledge and facilities to compare the economic effect of the use of the safe harbor to that of reliance on the law in each individual situation.

The Amount of the Loss (Basis) and Phantom Income

Rev. Rul. 2009-9 and Rev. Proc. 2009-20 both acknowledge that the amount of a theft loss resulting from a Ponzi scheme is generally the initial amount invested in the arrangement, plus any additional investments, less amounts withdrawn. Furthermore, both agree that if an amount is reported to the Investor as income in years preceding the year of discovery of the theft and the Investor includes the amount in gross income, then the amount of the theft loss is increased by the purportedly reinvested amount (the “Phantom Income”).

The amount of a theft loss resulting from a fraudulent investment arrangement is generally the initial amount invested in the arrangement, plus any additional investments, less amounts withdrawn, if any, reduced by reimbursements or other recoveries and reduced by claims as to which there is a reasonable prospect of recovery. If an amount is reported to the Investor as income in years prior to the year of discovery of the theft, the Investor included the amount in gross income, and the Investor reinvests the amount in the arrangement, this amount increases the deductible theft loss.

Deduction Not Reduced by Application of Percentage or Dollar Limitations

The Rev. Proc. 2009-20 safe harbor expressly addresses the treatment of Investors in Ponzi schemes through entities that are separate and apart from the Ponzi victims, such as partnerships. It states that an Investor that otherwise would be qualified for a theft loss will not be considered to be qualified to claim that deduction under the safe harbor. Instead, the actual fund or entity itself in which a Ponzi scheme Investor has invested will be considered the qualified investor for purposes of the safe harbor.

IRS officials and commentators have commented that pass-through entities such as partnerships and Subchapter S corporations will report the Ponzi scheme losses to each investor on their Schedule K-1 so that Investors who cannot use the safe harbor may file for their losses under the standard rules applicable to owners of interests in pass-through entities.

Year of Discovery and Deductibility

The safe harbor, like the revenue ruling, confirms that the Ponzi scheme will be treated as a theft loss, which means that the loss is deductible in the year of discovery.

The law and Rev. Rul. 2009-9 interpret “the year of discovery” of theft loss more liberally than the safe harbor. The safe harbor requires that certain specific actions be taken by authorities before a theft loss is discovered for tax purposes. The law does not require the taxpayer to go to that extent to recognize a theft loss.

The Rev. Proc. 2009-20 safe harbor defines the year of discovery as the year in which any of the following formalities were complied with:

The U.S. Tax Court defines the proof needed to pinpoint the year of discovery quite differently, as follows: A loss is considered to be discovered when a reasonable man in similar circumstances would have realized the fact that he had suffered a theft loss.

The year of discovery has also been defined by courts as follows: The proper year in which to claim a theft loss … being the year when the taxpayer in fact discovered the loss.

Amount of Loss in the Year of Discovery

Rev. Proc. 2009-20 actually acknowledges this legal principle by establishing percentage amounts of deductibility for the loss in the year of discovery.

Both IRS documents acknowledge that if, in the year of discovery, there is a claim for reimbursement with respect to which there is a reasonable prospect of recovery, then no portion of the loss for which reimbursement may be received is deductible in that year. However, the portion for which there is no prospect of recovery is deductible in the year of discovery.

In Rev. Proc. 2009-20, the IRS makes a determination for all Ponzi schemes that a certain percentage amount of a theft loss can be deducted in the year of discovery of a Ponzi scheme when calculating the ultimate amount of the deductible loss.

In addition, under the safe harbor, after calculating either one of these percentage amounts, the Ponzi scheme Investor must subtract any actual recoveries or potential insurance recoveries or guarantee type to determine the final allowable theft loss in the discovery year. This includes recoveries from SIPC.

Rev. Rul. 2009-9 only comments on the law. It gives legal guidelines as to the timing of deductibility of a loss but does not comment on the specific amount of the loss in the year of discovery.

Rev. Proc. 2009-20 states that if a taxpayer does not use the safe harbor, the taxpayer will have to rely on the case law in this area to prove that the 95% and 75% figures used in the safe harbor are accurate or close enough to be relied on by all Ponzi victims.

A taxpayer who does not use the safe harbor may still claim the 95% and 75% figures. However, that taxpayer will be required to prove that the 95% and 75% figures are accurate for the taxpayer’s situation using evidence that is separate and apart from the IRS’s findings. The IRS definitely has done many taxpayers a favor in the safe harbor by determining a fixed percentage for Ponzi scheme loss in the year of discovery. However, for Ponzi scheme victims who do not use the safe harbor, the law may provide a similar result if the taxpayer has proof to back it up.

Under the law, the taxpayer would be permitted to take 100% of the loss in the year of discovery minus the amounts for which there is a reasonable prospect of recovery. To determine what the safe harbor provides to the taxpayer, another comparative chart is necessary.

Doctrine of Equality of Treatment and Nature of a Safe Harbor

While tax law as a general rule does not look at the equities of a taxpayer’s situation, Ponzi schemes might warrant that type of treatment. To begin with, one must understand what is meant generally by a “safe harbor” and the “doctrine of equality of treatment”

A safe harbor typically is an IRS procedure that permits taxpayers to obtain certain tax treatment without administrative question because the permitted tax treatment is well within the boundaries of what IRS believes is the law. Furthermore, there is a Doctrine of Equality of Treatment that is applied sparingly but nevertheless requires the IRS to exercise its discretion in a manner so that similarly situated taxpayers are treated equally.

It would seem difficult for the IRS to make a determination that all the taxpayers suffering Ponzi scheme theft losses, wherever and whenever they may be, will be permitted a deduction at certain fixed rates at 95% and 75%, while denying these same rates of deduction to a select group of similarly situated taxpayers who choose not to do it the IRS way.

All of the comparisons so far of Rev. Rul. 2009-9 and the Rev. Proc. 2009-20 have compared the similarities and benefits of the safe harbor with those provided under the law.

The following describes a Waiver of Potential Benefits that must be exchanged for the benefits of the safe harbor and illustrates how costly that safe harbor may be form a tax standpoint.

Waiver of the Right to File Amended Returns Eliminating Income