↓ Skip to Main Content
Home › Pre-immigration income tax planning › How To Take Advantage Of Lower Rates In American Tax And Avoid Paying Taxes On Wealth Accrued Prior To U.S. “Residency”

How To Take Advantage Of Lower Rates In American Tax And Avoid Paying Taxes On Wealth Accrued Prior To U.S. “Residency” 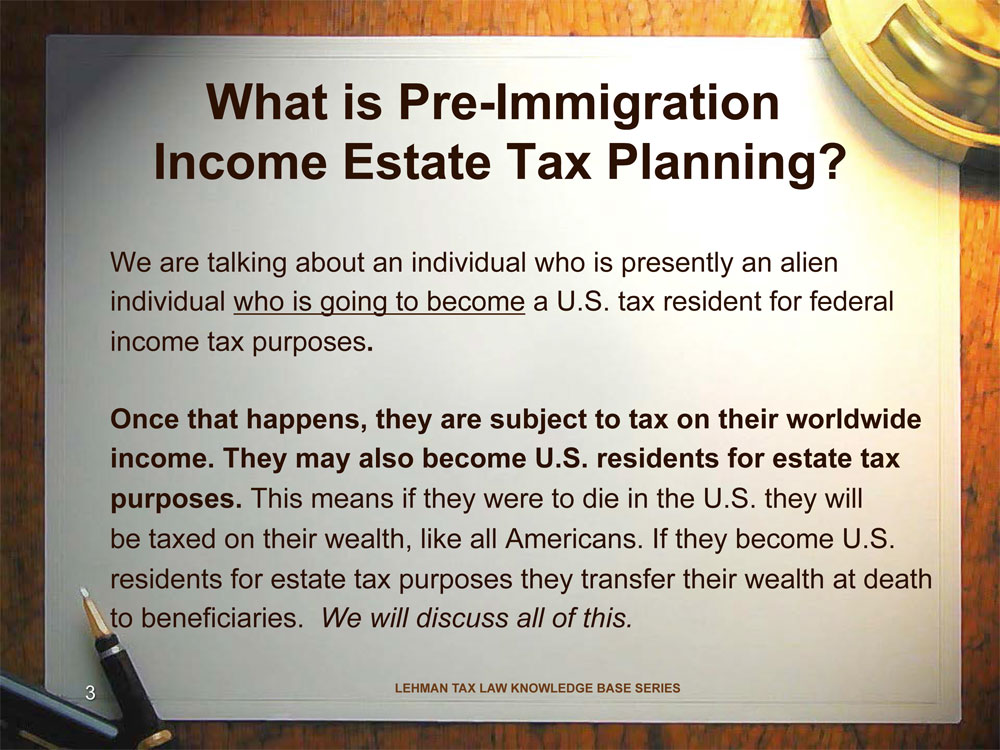 The United States under the new Trump Tax Bill has to some extent become a tax haven for the wealthy immigrating individuals.

More and more wealthy immigrants from strife torn or corrupt countries, can come to America and do business in America, under a tax regime that taxes profits and capital at lower rates, (the “Trump Taxes”).

Foreign investors from throughout the world are coming to the United States for increasing growth and opportunity for prosperity. Many of them are already wealthy.1

It is very important that wealthy immigrants to the U.S. understand the tax laws regarding

(1) profits in the United States,

(2) the tax laws that govern gifts of U.S. assets made by foreign taxpayers, and

(3) transfers of US assets by nonresident aliens who die owning certain types of wealth in the United States.

The United States now has several categories of individual income tax payers that may make large amounts of income and grow their wealth significantly; sometimes at a 20% tax rate, depending on the type of income they earn in the U.S. tax system.2

The maximum tax on corporations, both foreign and domestic is 21% on profits.

Wealthy foreigners who are immigrating to the U.S. and planning on a permanent move to the U.S. need to make sure that all of their accrued wealth earned over the years should not be subject to U.S. income tax and/or a tax on capital gains, because these income and gains were accrued, when the taxpayer was not a U.S. person.

However, without the proper tax planning [in advance] of becoming a U.S. resident for tax purposes could be very costly in the form of the payment of U.S. taxes on accumulated wealth.

It is extremely important that wealthy individuals who are seeking a degree of permanency in the U.S. tax should recognize that all of their economic gains and income that accrued before they became US taxpayers do not need to be subject to U.S. income taxes or gift taxes or death taxes [if they plan in advance] before obtaining their tax residency status.

Nonresident alien individuals who plan on a permanent move to the U.S. do not have to risk paying US taxes on sales of assets or payments of income that have been earned over all the years before they became a U.S. taxpayer if they take the right steps to protect their accrued income and gains in advance of U.S. tax residency.

In addition to planning to make sure that their accrued income and gains are not taxed; tax planning for the US immigrant must be planned in advance for the potential death of these wealthy individuals, who immigrate to the United States.

Value can be lost without good professional advice.