QUESTION: The U.S. has a special tax regime for individuals who are not “tax residents” of the United States. What is the definition of a “nonresident Alien” for U.S. tax purposes?

A nonresident alien individual is defined as any citizen of a country other than the United States who is not a “U.S. resident” for U.S. income tax purposes. The general rule is that an alien is not considered to be a U.S. resident for tax purposes if the alien does not have (1) a green card representing permanent residency in the U.S. or (2) a “substantial presence or time period”. 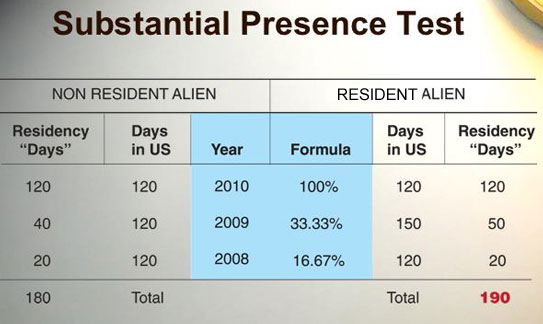 Question: Are there exceptions to the “substantial presence” rules that permit an alien taxpayer to stay longer in the U.S. without being taxes and a U.S. taxpayer?

Answer:  Yes. An alien may stay for a longer period of time in the U.S. without being considered a U.S. taxpayer if there is a U.S. Tax Treaty with the U.S., (see (a) below), or if the taxpayer has a “closer connection” with another country during the year. (See (b) below)

(a) Treaties. The United Staes has tax treaties with many countries. These treaties generally provide that the residents and corporation of each country to the treaty are entitled to a more liberal tax treatment than residents and corporations of non-treaty countries. The concept of residency under the treaties is different than the general definition and may permit a nonresident alien to spend more time in the U.S. each year without being a U.S. tax resident. Generally, the tax treaties will permit the alien individual to remain a non-resident for U.S. tax purposes so long as the alien covered by the treaty stays less than 183 days in the U.S. each separate year; and not over the cumulative three years period.

(b) Closer Connection. This same type of treatment, that of permitting aliens to have an extended stay in the U.S. of less than 183 days in each year without become a U.S. tax resident, is also available to certain aliens that are not from countries governed by a U.S. tax treaty. If an alien has provable close business and social ties to his or her native country, the substantial presence test is extended due to their “closer connection” to a foreign country than to the U.S.