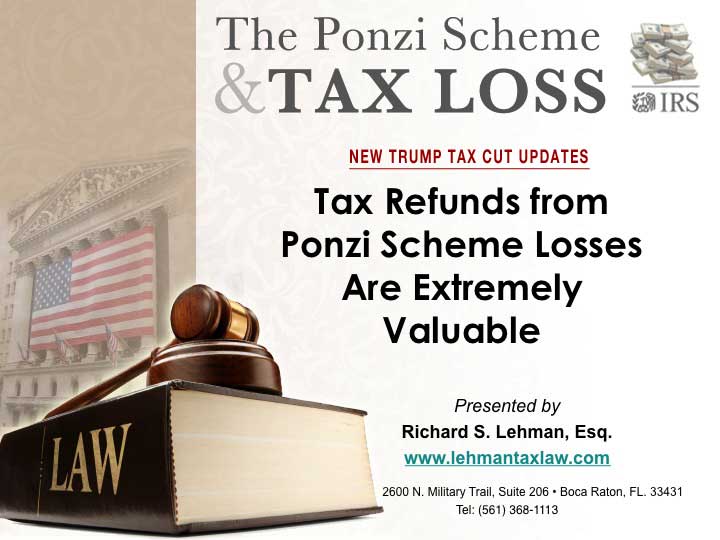 Under the Trump Tax Cut and Jobs Act, there no longer is the ability to carry back losses to prior years to obtain deductions and tax refunds. There no longer is a “loss carryback deduction”. Loss carry forwards are allowed ad infinitum. Under the new Trump Tax Cuts, losses can be carried forward indefinitely. However, a taxpayer can no longer collect tax refunds from past Ponzi scheme losses that are first reported in 2018 and thereafter.

Individuals who have had losses from financial thefts and other theft losses in 2015, 16 and 17 will need to be careful to take advantage of any tax loss carrybacks that still may be available to these taxpayers.

Not only will Ponzi Scheme losses not be available for use in prior years; taxpayers may have to wait far into the future to recoup Ponzi Scheme losses from tax refunds if their incomes have decreased and they cannot make present use of the otherwise valuable tax losses.

Ponzi Scheme Theft Losses may have become less valuable for tax purposes because of the Trump Tax Cut and Jobs Act that was signed into law in December of 2017.

That tax bill lowered tax rates in the future and also reduced the value of Ponzi theft loss deductions by eliminating the right to carry back losses and receive tax refunds from earlier years. Loss carrybacks have been eliminated. There are only loss carry forwards available from 2018 forward.

What this could mean, (for example) is the following:

Assume a wealthy investor had profited from Ponzi Scheme income in one of the states with high taxes and in a tax year where that total income tax was more than 50% due to the effect of the combined top rates of say New York City, State and Federal income taxes on Ponzi Scheme $500,000 of earnings per year. Assume this occurred every year for three years starting in 2015. The Taxpayer will pay total taxes of $750,000 over the three-year period (2015 to 2017) on the profits.

Assume in 2021 that taxpayer learns that the $1,500,000 in profits for the years 2015, 2016, and 2017 was illusory and never existed. Assume in 2021 that the taxpayer now has a theft loss deduction of $1,500,000 because the gross profits were left in the Ponzi Scheme and ultimately lost by that taxpayer. Now, assume that by 2021 the taxpayer has retired to one of the United States that has no city or state income taxes; and assume the retired taxpayer has a reduction in income and now pays taxes in the 20% tax bracket. As a result of the new tax cuts, the Ponzi theft loss deduction that is allowed on the $1,500,000 loss may be worth only $300,000 in refunds at a 20% tax rate.

The taxpayer in this example will have paid taxes on taxable income equal to fifty cents on a dollar ($750,000), and will receive tax refunds at twenty cents on the dollar, ($300,000). Furthermore, the taxpayer may need to wait many years into the future since there is less taxable income in each of the later years upon which to collect the refund.