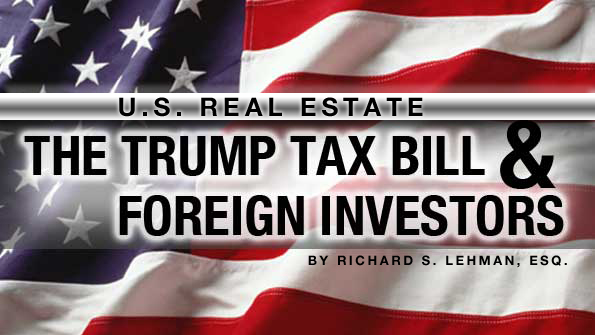 Over the last 40 years, Richard S. Lehman has consistently guided clients on topics ranging from complex tax scenarios in real estate, business acquisitions and sales, securities offerings, tax contests, probate litigation and numerous other areas of commerce.
> Download this article as a .pdf

Advice For Large, Medium Size And The Smaller Foreign Investors

The boom in United States real estate caused by foreign investors is about to get bigger as a result of greatly reduced U.S. income taxes for nonresident aliens and foreign corporations.1

Because of the new Trump tax law, (“the Trump Tax Bill”) a foreign investor could receive a forty percent (40%) reduction in the U.S. income tax of his or her gains and income from their real estate investments. For those foreign investors who already were invested in U.S. real estate, their after tax returns could now be forty percent more valuable without raising a finger.2

Taxes on U.S. real estate income will now be lowered to tax rates of 21% for corporations, both foreign or domestic. With U.S. home inventories low, a world in turmoil and many countries around the world continuing to charge high tax rates, the flow of foreign investment seeking real estate in the U.S., caused by the Trump Tax Bill can only greatly increase the desires of the rest of the world to own a piece of America.

Furthermore, not only has the after tax income of real estate investments gone up for the foreign investor, the investment structure has become more simple.

This article will focus on

The Trump Tax Bill not only reduces the tax rate of real estate profits, it decreased the amount of income that will be taxed annually in the early years by decreasing the time in which deductions could be taken in calculating taxable income.

The tax deductions that allow the investors to reduce their current taxable income on real estate, such as depreciation has been accelerated so that certain components of the tangible personal property related to the building structure may be deducted at a more accelerated pace than under the prior law.

Generally, under the new law, business interest expenses are limited only to 30% of the adjusted taxable income of the taxpayer as an annual deduction for business with annual gross receipts in excess of $25 Million.

The amount of business interest not allowed as a deduction for any taxable year may be carried forward indefinitely and utilized in future years, subject to this and other applicable interest deductibility limitations and restrictions.

Taxpayers investing in real property may elect to avoid this limitation on deductible interest.

Ultimately, in a successful real estate venture in the United States, there will be a certain amount of United States taxes that must be paid on the taxable profits from the sale of the venture. However, when the time for sales comes, the tax payment should not be onerous. The foreign (or U.S.) corporation that will own the U.S. real estate will be subject to a U.S. tax on 21% of the gain resulting from the sale.4

Most importantly, as a result of the technique of liquidating the U.S. corporation after it has paid the income taxes or capital gains taxes,

Each of these United States corporations may be liquidated upon the sale of the United States real estate asset and there will be a single tax on the gain earned by the liquidating U.S. corporation at only 21%, with no additional taxes.

In addition to insuring a single U.S. income tax at lower rates and no estate and gift taxes, there will be no exposure whatsoever to the United States “branch tax” that will be discussed later in conjunction with the discussion regarding the Medium Size Investor.

The Middle Size Investor may very well wish to structure his or her investment like the Larger Investor. That is the use of both a foreign corporate Holding company and a U.S. subsidiary corporation to own the U.S. real estate.5

There is, however, an unusual tax that is applied to a foreign corporation that directly owns U.S. real estate and does not distribute profits to its investors.

This tax is known as the “Branch Tax”.

In the event the foreign investor is investing cash in a smaller piece of real estate that requires an investment of less than $250,000, there typically is no need for a more complicated structure than the limited liability company structure. This $250,000 number is arbitrary. There is a $60,000 exclusion for the estate tax and the balance of the estate taxes on the remaining amount is paid at a relatively low rate. These companies will be advantageous because the Trump Tax Law will permit these type of holdings to reduce their actual taxable income. Instead of charging a 21% tax rate that is available for corporations, the new tax bill will permit the limited liability company or the individual foreign investor a deduction equal to 20% of the amount of taxable income before calculating taxes. Thus, the income tax on U.S. taxable income for purposes of the U.S. income tax on real estate owned by an LLC is a tax on only 80% of the actual earnings. This deduction is subject to certain maximum amounts of income.

There may be a minimum benefit by individuals investing in United States real estate or through limited liability companies from an income tax standpoint, if the income earned is not significant. There may be the benefit of a lower tax rate and the 20% deduction from earnings. However, this benefit may be far outweighed by the use of the foreign corporate structure which does not expose a nonresident alien investor to United States estate taxes and gift taxes at all.

The long and the short of this is that with a little tax planning and use of all of the tax techniques to reduce U.S. taxes on U.S. real estate, the foreign investor should be able to earn ordinary annual income from the rental of U.S. real estate projects at a tax cost of approximately fifteen percent (15%) as a result of deductions; and a tax cost from the real estate upon sale that will be in the twenty-one percent (21%) range.

Generally, the benefits of the new law are available to the American investor and the foreign real estate investor. However, there is another tax planning tool that has been in the law for a long time and that the American real estate investor does not have access to. It is, however, available under the right circumstances to the foreign investor. This is the tax planning tool known as the “Portfolio Interest Deduction.”

Not only will the foreign investor have the advantage of the new lower tax rate of the Trump Tax Bill and the new accelerated depreciation tax deductions. Subject to certain limitations, they will be able to finance their United States real estate with their own funds that may be invested in U.S. real estate in the form of a loan so long as the foreign investor owns, directly or indirectly, less than ten percent (10%) of the real estate project. Under the right circumstances, the foreign investor may enjoy “Tax Free Interest Income” that will be paid on loans that are made by the investor.

This is contrary to the deduction for depreciation that may be currently taken to offset current income, but will reduce the taxable value of the real estate asset so that on the sale of the asset, the cost basis will be reduced causing there to be larger taxable profits on the sale.

The Portfolio Interest loan and the tax deduction that accompanies its payment is not available unless the Portfolio loan meets several criteria; the most important of which is that the foreign lender and or his or her “immediate relatives” cannot together own ten percent (10%) or more of the real estate project that they have invested in.

In calculating whether an investor owns less than 10% of a particular investment, the tax law rules will require that certain relatives of the investor and certain corporations and partnerships that can indirectly increase the investor’s ownership in the real estate are excluded from ownership.

In addition to his restriction, the Portfolio Interest deduction will not be available under several other unique circumstances.

If available, the Portfolio loan deduction, coupled with the depreciation deduction and other techniques will often insure that there is a cash flow from the real estate investment but little or no taxable income whatsoever resulting from the project for a lengthy period of time.

2. This boom in real estate may lead to a scarcity of United States real estate in states that have a low state income tax due to the effect of the Trump Tax Bill.

There is also a gift tax imposed on the nonresident alien individual who transfers U.S. real estate as a gift.

The U.S. charges an estate tax on a foreign investor who owns real estate in the U.S. directly or through a U.S. corporation, partnership and certain U.S. trusts. The gift tax will also be asserted on individuals in limited liability companies. This estate and/or gift tax is particularly onerous for foreign investors. While Americans may die, each owning eleven million dollars ($11,000,000) of assets without paying this tax, this is not the case for nonresident alien individuals who will be subject to the estate tax on real estate owned directly by the individual.

This estate tax imposed at death will tax the nonresident alien on any real estate that is individually owned or if the real estate is owned by a U.S. corporation that is owned directly by the foreign investor.

4. Dividends distributed to a foreign shareholder will be taxable to the extent of earnings and profits.

Care must be taken to prevent unnecessary cash distributions that fit this situation.

5. United States has numerous tax treaties around the world.

These tax treaties will continue to have their effect, though undoubtedly, there will need to be changes based upon the Trump Tax Bill. Investors from treaty countries will typically have an income tax treaty. However, there are very few estate tax treaties between the United States and foreign jurisdictions. The income tax treaties, at times, may produce even better tax results for the foreign investor, depending upon circumstances.

There are also several jurisdictions around the world that lend themselves and their corporate entities to this tax plan even though there is no tax treaty. Nonresident alien individuals may form a corporation in any one of the many countries. These countries typically will not tax corporations formed in that country unless the income being earned or the assets being held have a situs in that country of incorporation.